What a delight seeing the University of Lincoln’s graduating drama students in Treasure Island on Tuesday night…  I wasn’t sure what to expect from the production, thinking that it might only be suitable for children (considering the number of Cub Scouts in the foyer before the show), but I was very pleasantly surprised and thoroughly enjoyed the evening.

We’ve all heard of the story, but this show really has got lots of its own twists and turns;  the LPAC website explains the story:

With a treasure map in her pocket and the ghost of Captain Flint (James Ashfield) never far behind, young Jem Hawkins (Laura Potente) is drawn into a world of swashbuckling excitement, brimming with buccaneers and buried gold as she sets sail to Treasure Island.

Join us on the good-ship Hispaniola this Christmas for an action-packed retelling of the classic pirate adventure told by University of Lincoln’s graduating drama students.

Walking into the theatre we were transported to the attic room where the big chest was revealed… throughout the performance the set transformed into a pirate ship, the details of which were exceptional, and then to an actual island, and then there was a bit of an ‘Indiana Jones’ theme.  All the sets and staging were so well done I was really impressed by the quality and details and the work that had obviously gone into the production.  I don’t want to give too much away about the finer details, as the element of surprise at each stage added to the overall experience, but all I will say is the show was fast moving, comedic, sometimes beautiful, and definitely great fun.

The Director, Dominic Symonds, in the programme, writes:

… at times it’s exciting, as the courageous treasure-hunters carry out their quest; at times it’s exhilarating, as the menacing Long John Silver (Jordan Sheil) tries to scupper their plans; and at times it’s downright daft, as we follow the exploits of the bumptious buffoons who fund their voyage into the unknown.  In the end, it’s a story about a youngster’s hopes and dreams, about overcoming challenges and becoming stronger in the process.  That’s something we can all learn from…

There were lots of stand out moments for me; James Ashfield (Captain Flint and the Rock voice) really showed off his ghostly dark side in more ways than one; I definitely jumped a few times at his terrifyingly booming voice and could see the younger children looking a little wary as he made various surprise entrances throughout the show! 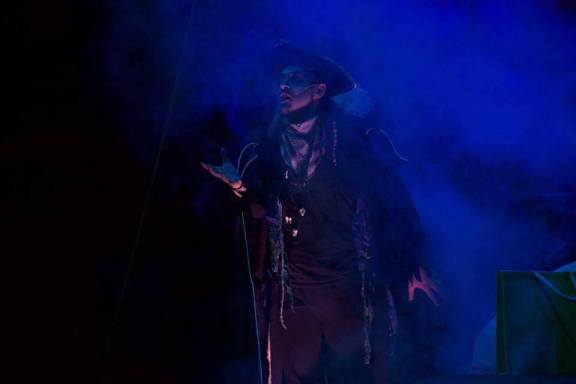 Jordan Sheil (Long John Silver) gave an exceptional performance, I’m not sure how his voice is going to last for the whole run, especially with multiple shows daily, but his characterisation of such a nasty character was brilliant. 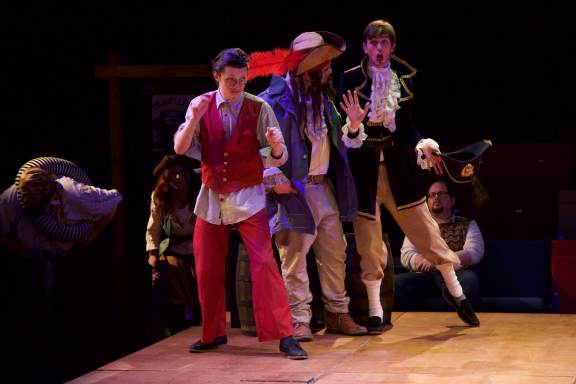 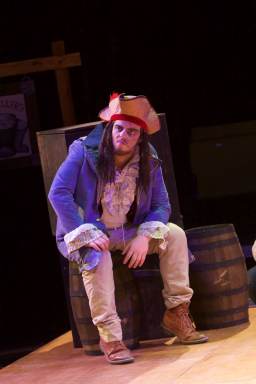 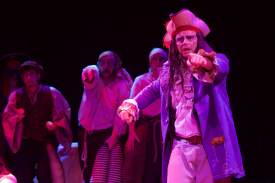 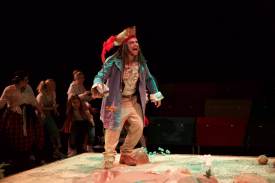 Laura Potente (Jem Hawkins) and her 3 stage sisters Tabitha Foster (Charlie Hawkins), Holly Marshall (Lotte Hawkins) and Holly Lomas (Fran Hawkins) each had their own characteristics which came across clearly to the audience, I particularly loved the tutu and swan hat!

Sophie Cole (Mrs Hawkins) showed off her great singing voice with a beautiful solo and Joe Turner (Ben Gunner and Uncle Jim) showed his versatility transforming from the old Uncle, to the Castaway Ben. 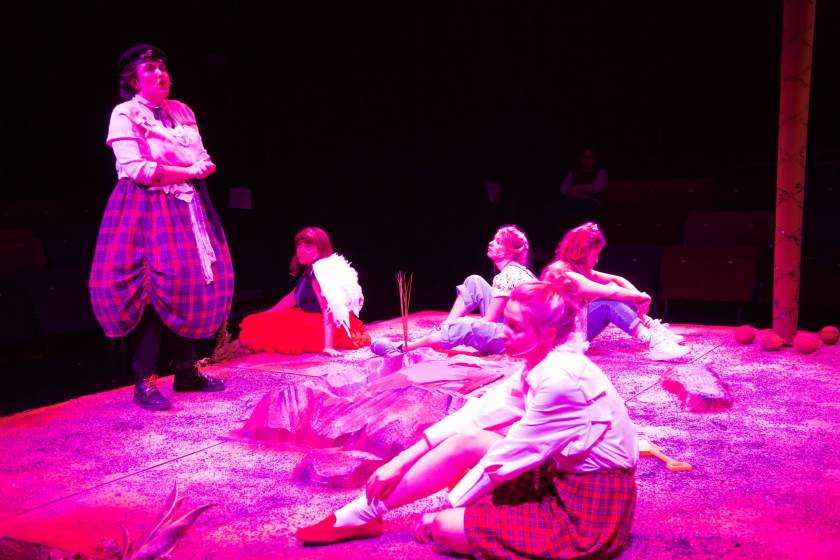 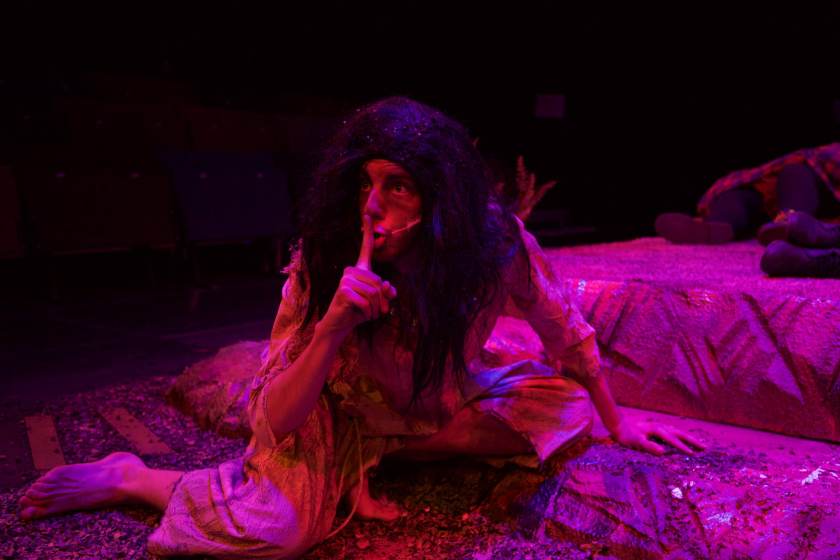 Other cast members all played their parts well and contributed to the whole show, Heidi Green (Hands), Rob Clarke (Morgan), Adam Cockerill (Captain Smollett), Francesca Bolingbroke (Merry), Olivia Calvert (Gray) and Elliot Sargent (O’Brien), who had some of the funniest lines in the show. 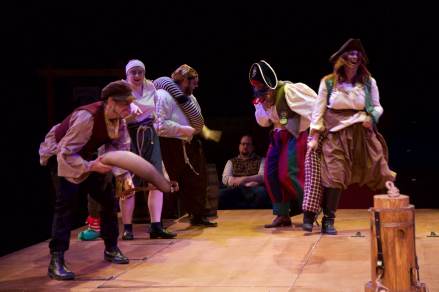 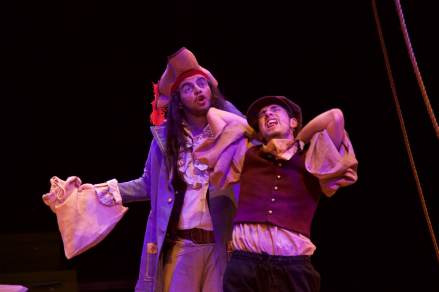 But my favourite performances were given by Jason Lodge (Squire Tralawny), supported by his side kick Jordan Leith (Dr Livesey);  their hilarious antics and comedic timing had the audience in fits of laughter on several occasions, and definitely stole the show for me! 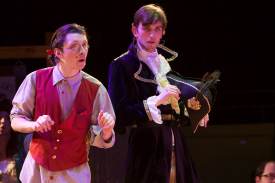 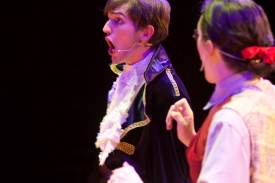 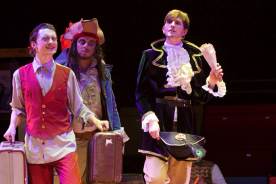 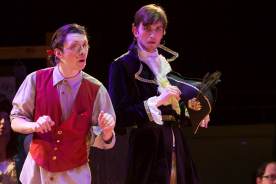 I can’t review the show without mentioning the brilliant musical score, provided to us by Mark Wilde who is currently the Musical Director for Lincoln Cathedrals 2017 production of Jekyll and Hyde as well as his other commitments which include singing in the Cathedral Choir and many other credits.  We had  a feast of songs and musical numbers which took us from scene to scene and included ‘What’s Within the Chest’, ‘We’ll Follow the Map’, my absolute favourite ‘How I lost me leg’, the most hilarious pirate gospel number you could imagine which had the children and the adults in the audience probably laughing at completely different things! 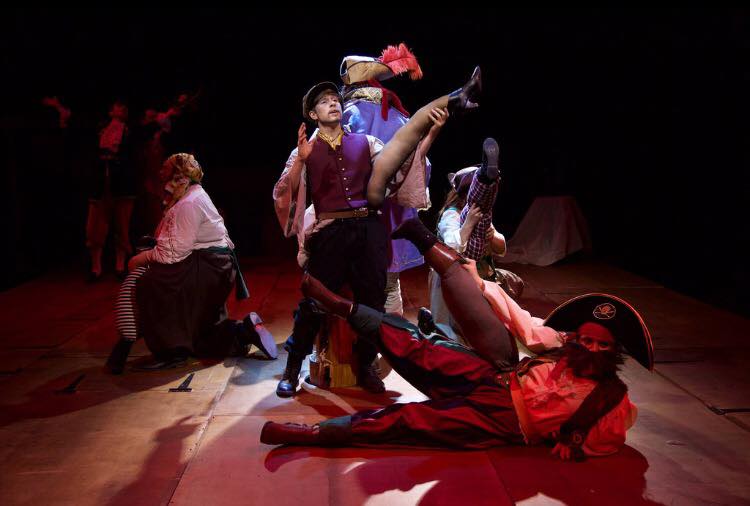 ‘Ahoy! Ahoy!’, ‘The Proposal’, ‘Lullaby’, ‘X Marks the Spot’, ‘Believe’, ‘Rock’s Riddles’ which the children (and adults) in the audience thoroughly enjoyed as they worked out the riddles as they show progressed. and finally ‘Treasure Island’ which ended the show on a great high (despite the abrupt ending – a little mistake by the sound team I think but all added to the fun!), plus lots of instrumental music for the sword fights which had the children sitting on the edge of their seats with avid interest.

Those that know me well will understand that I don’t comfortably join in with the traditional ‘audience participation’, and yet the calls for ‘Captain Flint’ throughout the show saw me shouting at the top of my voice to my hearts content along with the rest of the LPAC auditorium, with our endeavours rewarded with the appearances by James Ashfield.  The way the cast embraced and encouraged the audience certainly enhanced the experience for me and I’d encourage anyone who fancies a good giggle and a feast of entertainment during the lead up to Christmas, to get their tickets and go and have a bit of fun!

I wouldn’t be doing the show justice if I didn’t mention those important people that work on shows like this behind the scenes, the Crew.  Firstly the costumes; there was obviously a great team in place to come up with such stunning and authentic (mostly!) designs;  so well done to Helen Symonds, Steve Nash, Regan Bailiss, Gemma Batey, Katie Daw, Oksana Dergachova, Claire Godfrey, Heather Gray, Alexandra Hall, Poppy Howell, Katie Jacques, Lucinda Spurling, Alex Stanley-Ahmed, Hollie Starr, Marine Sztana and Bethany White for all their creative inspiration!

You’ve still got plenty of opportunity to book tickets and take your family to see this wonderful show; you can click here to book!

(Thanks to Phil Crow and Ashley Walls Photography for the photos included above, and some of my own (taken during the show on Tuesday 13th December, with no flash!).